Can Adding Series Resistance inside of Capacitors and Inductors Improve ... 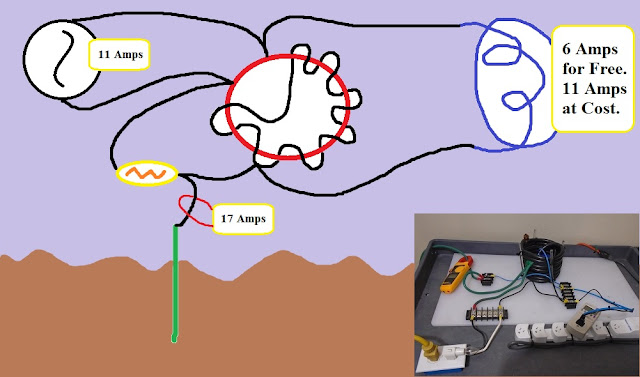 Referenced post at Energetic Forum
Posted by Vinyasi at 9:45 AM 2 comments:

Parametric Metamaterial
http://www.wavenology.com/?page_id=186#4
Posted by Vinyasi at 7:30 PM No comments:

Trapezoidal approximations were accidentally allowed within the following simulations ...

No trapezoidal approximations were allowed to occur within these two simulations ...

These four simulations are my attempt to understand the secret to Saith Technologies' Aerial Extraction of Energy invented by Sangulani Maxwell Chikumbutso of Zimbabwe, Africa.

I believe that a gas discharge tube provides a pathway of ions not unlike that which precedes a thunderbolt. A simple neon bulb, plus the judicious use of transformers, may be at the heart of his amplification of aerial reception of electrical power resident all around us. My simulations in this video exemplify this possibility. I am certain of it.

As for his inability to patent his technology, I find shame in the patent system who espouses physics. Yet, it is within physics that Conservation of Energy must bow in humility before time before commanding anyone to adhere to its short-sided principles of limiting our use of Immortal Energy.

This is self-evident to anyone who has invoked the theorem of Emmy Noether.

It is my wish that no one disgrace physics ever again by decrying the hope which all well wishers of free energy may aspire to. This is my quest now that I have solved other riddles: the riddle of argyria and the riddle of infinite golden ratios.

There is no reason - no good reason - why we should continue to suffer for lack of free energy or lack of good, affordable, homegrown health care. Name me a price and I'll name you a greater one: the cost of ignorance and slavery to superstition.

Downloaded and saved onto your computer and then loaded into ...
https://is.gd/blankcanvas

Not much different from my latest simulations of free energy. Instead of an initial kickstart to the simulation using the nose (the front end; the positive pole) of a battery, I use an aerial. But most of the energy for running this simulation is supplied by the circuit itself.

There's one caveat, though...
My simulations are not being taken seriously since they appear to be violating the politically correct version of physics, namely: ignore time shifts (dilations) and ignore Emmy Noether ... 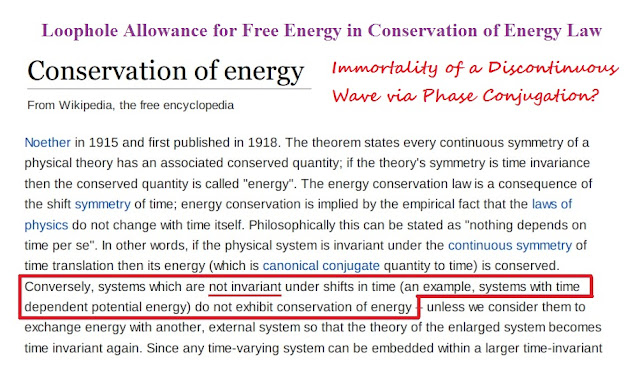 Consequently, trapezoidal approximations within the simulator's calculations is being blamed as just one of many reasons not to take these simulations of mine seriously. They're to be considered a novelty at best.

Yet, they've taught me the physics behind these simulations by providing a training ground to help me know what to look for in science to help explain these phenomena. So, I don't take my critiques too seriously. Yet, I'm starting to use Spice for all of my future simulations as you'll get to see in a little while after today, the 6th of May 2017.

For a synopsis of how these simulations can create energy without violating the laws of physics, see ...

Posted by Vinyasi at 5:23 PM No comments:

The reversibility of phase conjugation makes it possible to make more time from time and more energy from energy provided you have some time, or energy, to make time/energy from. I don't know how to make time or energy from nothing. But if you have some of either, more can be made from those fixed amounts with the judicious use of phase conjugation, wave discontinuity, magnetic hysteresis, inductive kickback and dissonant timing in a closed loop.

Dissonant timing results from time lags imposed by the ultra-low capacitors and the mass of iron in the coil of wire (transformer core). These two influences of electric and magnetic time lag incur an out-of-phase relationship among the parent and their daughter waves. This state of asynchronicity is ideal for boosting surges within the confines of these simulations. Oddly enough, nice neat and clean tidy sine waves resulting from tank circuit methodologies don't work, here. The oscilliscope should look like a wash of color as if someone had brushed a broad paint brush across the scope's window.

The ultra-thin dielectric of the capacitors causes waves transmitted through them to slow down just as light passing through denser material slows down and refracts. By comparison to the reflected portion of the split parent wave, the transmitted portion will lag behind the reflected portion to return to this same position a little late as both traverse around the confines of the closed loop encapsulating their travels.

The magnetic field of the iron cored, coil of wire also maintains a time lag for slowing down the magnetic component of a wave as it passes through its adjoining coil. And the more massive is the core, the more the wave will get slowed down. In the words of the Master - Nikola Tesla, "for every two hundred pounds of iron added to the device, one horsepower is increased" -- William Lyne, from his book: "Pentagon Aliens" in the chapter concerning Tesla's Special Generator, ...

... also known as his Tri-Metal Generator for its use of aluminum, copper and iron.

These are my bullet points upon which is based my theory of infinite time, and for that matter - infinite energy, from a finite quantity of both as they are derived from my simulations.

Forget E = MC squared. That's a distraction to lull you into submitting to the sole authority of free energy derived from high powered physics, alone. We can do it from electricity; from the voltage difference between my nose and my toe. It doesn't take much - energy or intelligence - to "get it". It's really quite simple.

We don't have to invoke zero point energy from the vacuum, or the aether, or fraud, or whatever.

If you want to invoke anything, invoke Emmy Noether - not her whole theorem; ...

... having to do with the exception to the rule of Conservation of Energy. The exemption that time shifts - time dilation - takes when it comes to balancing out the accounting of time in equals time out; or, energy in equals energy out. Time and energy are exempt from conservation of either whenever either are shifted in time.

Posted by Vinyasi at 5:13 PM No comments:

This is the 2nd corrected version of this video predicated on the following simulation ...
http://tinyurl.com/is-this-realistic

Unlike the prior simulations, though, this one only uses one transformer and exhibits a slower escalation rate towards infinity more similar to this earlier simulation ...
https://is.gd/perpetual_motion

Which, of course, is not actual perpetual stability, but is very very slow at rising towards infinite output.

All of my best simulations are zipped up at ...
https://is.gd/is_this_realistic

And the videos on trying to analyze why these simulations work at all, using standard conventional wisdom, are ...
Pt.1 ...
https://youtu.be/jFCkzYqnO2w